MORGANTOWN — When Anthony Becht, who is probably the best tight end ever to play at West Virginia, first heard that Dana Holgorsen was going to incorporate tight end play into his spread offense and had brought in a couple of studs to handle the duties, he had two thoughts.

The first, a serious one as he saw that such a change could offer a great deal to Holgorsen’s already electric offense.

The second was, to be honest, more in jest.

“The positive for me (of WVU not making any significant employment of a tight end recently) was that all my records will remain intact,” he said with a laugh after having completed a Monday morning bicycle ride on the boardwalk in Ocean City, N.J., where he is enjoying a family vacation.

Indeed, Becht had been on the receiving end of Marc Bulger passes while blocking for the likes of Amos Zereoue and Avon Cobourne, two of the top four rushers in WVU history, to say nothing of Quincy Wilson and Curtis Keaton.

At 6-foot-6 and 265 pounds, he was something to contend with physically and in his career caught 83 passes for 1,178 yards and 11 touchdowns.

His senior season was his most productive with 35 catches for 510 yards and five scores, leading to him becoming a first round draft pick (27th player selected) of the New York Jets after they acquired the rights to him and the No. 13 pick in that draft, defensive end John Abraham, for receiver Keyshawn Johnson.

While Johnson was an exciting playmaker, it was quite a trade, for Becht played 11 years in the NFL, the first five for the Jets, and Abraham played 15 years in the league and had 133.5 sacks while twice earning All-NFL honors.

Now a popular television analyst and personality, Becht seemed to be the natural person to explain just what the return of the tight in the persons of 6-4, 274-pound Trevon Wesco and 6-4, 245-pound Jovani Haskins will mean to the offense.

“Tight ends, No. 1, have been an integral part of National Championship teams over the last couple of years… O.J. Howards, guys who have been able to give the quarterbacks an outlet,” Becht began.

Indeed, the dominant teams in college football have grown out of a physical approach more than out of turning into a flying circus, using tight ends and defense.

“I think the biggest thing is mismatches. Some of the Big 12 defenses, if you have an athletic tight end that has good size, that is mobile, has good quick hip movement and can get in and out of routes, you can see the dangers that player can bring,” Becht said.

“You look at some of the recent players, that (Mark) Andrews kid from Oklahoma, (Jace) Amaro at Texas Tech. They had tremendous statistics that solidified more what the offense can bring but what the receivers can do.”

But the tight end doesn’t only enhance the passing game.

“It also generates a little bit more power to your running game. You have that extra blocker now, whether he’s attached to the offensive line or detached out in space, you have that outside protector, the guy that can dominate the edge.

“You look at the size West Virginia has at tight end, you can utilize it in different situations.”

But, in the end, he is just that, an end…a receiver who blocks.

“The key is that the tight end in the offense can run the seam routes, the deep overs, the smash routes heading to the corner. You have to do it with speed and with fluidity so that you are a factor and you do affect what the defense shows you.”

The presence of such a factor on the offense adds a new dimension to what star quarterback Will Grier can — and shouldn’t — do.

By being able to throw to an extra receiver, he gives himself another chance to get the pass off when under pressure, rather than scrambling as he was forced to do in the Texas game, ending his season prematurely with a broken finger.

“Unfortunately for me, I covered that Texas game when he got hurt. I really think for Will, the numbers are tremendous, the after scramble plays, keeping your eyes down field are tremendous,” Becht said.

“For Will to take the next step, it’s being able to find the holes in the defense within the scheme they are trying to run quicker. When you are talking about the quarterbacks who can play at the next level, you want to be able to see a little less of that scramble stuff. It happens sometimes because of protection breakdowns but there’s also plays that are just left out there on the field.

“If you sit back, see the field, deliver the pass on time, that’s what you want to see with Will. You want him to not only see that he can help this offense more, but that he’s a candidate to take it to the next level of play.” 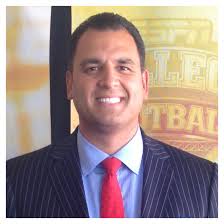 The tight end not only gives him the man to whom he can release the ball under pressure, but he also can be kept in to block blitzing linebackers, giving him more time to find David Sills V, Gary Jennings and Marcus Simms downfield.

All of it sounds so simple that you wonder why the game went away from the traditional tight ends.

“I think with the spread, you don’t need that size guy on the inside, so why have a guy spread out unless he is a superior athlete when you can put a faster, quicker, shiftier guy in those positions,” Becht said.

“There’s benefits on both sides. It becomes a smaller target for the quarterback or you get a guy who is 6-5, 250 or 260 pounds out there with good technique in the run game and can run those pass routes, it becomes a bigger weapon.

“Plus, you can put the ball in a lot of positions, even if it not completely open, if you have a good tight end he can bail the quarterback out. You can’t cover everybody, and when you can get your biggest guy on the outside, it’s a huge weapon for the offense.”

Becht admits watched the college game has been a void for him as they went more and more to the spread.

“I will say, the concept of the offense in college I don’t embrace a lot, but I know that’s what makes the game exciting. You get tremendous athletes on the field more than ever on some of these teams, but when you really dig down and see the teams that are winning consistently — the Bamas, the Clemsons — they have tight ends in key roles,” Becht noted.

“I think other teams are starting to see that and trying to employ tight ends a little bit more.”

And he credits Holgorsen for being flexible in his coaching philosophy.

“Dana came in a very pass-happy coach. As he’s seen the run game develop and be a positive, he’s grown that more than at any level of his career,” Becht said. “Now he’s kind of seeing how do you put wrinkles in with the personnel you have. I think it’s very refreshing to see he understands how to utilize the players he has on his team.”

And with it comes another bonus for the offense, having a physical attitude.

“You start flexing tight ends out, that’s a different animal now when the defense with the undersized, hybrid linebackers have to deal with it,” Becht said. “It’s a dominating force to the edge. Now you extend him out and other than the mismatches in the pass situation he can make some thunderous, authoritative blocks in run situations and make a difference and change the attitude of what the team is.”