Posting the top five scores of the day in smallbore and seven of the top eight in air rifle, WVU enjoyed individual success past the four counting scores in each discipline on the way to a 4715-4665 win at Akron in the Mountaineers’ opening rifle match of the season on Saturday.

WVU’s showing in its first match of the season was a solid one, especially going against a team that had  already competed in six matches earlier this season. The Zips fell to 4-3 overall and 2-2 in conference play.

“I’m pleased with the performance of the team today,” 15-year coach Jon Hammond said in a statement. “For most of our athletes, it was a new range to shoot on and for everyone, the first college match for a long time. There were a lot of positives and encouraging performances.”

WVU’s potential depth, touted by Hammond earlier in the week, showed up.  Seven Mountaineers finished inside the top 10 in both the smallbore and air rifle standings, and non-counters had scores that would have boosted West Virginia’s final totals had they been included.

Tal Engler’s 586 in smallbore was the best on the day, and combined with Calista Smoyer’s 581 would have given the Mountaineers 10 more points in smallbore. Obsorn’s 595 air rifle showing would have boosted the count in that discipline by four.

In her Mountaineer debut, freshman Molly McGhin, a native of Griffin, Georgia, took first place with a combined score of 1180. She was followed by sophomore Smoyer, who topped her personal best with a 1178 combined score.

“It’s very good to see the freshmen perform well in their first college match,” Hammond said. “We had three different freshmen lead the team in air rifle, smallbore and combined.”

Becca Lamb, a freshman from Centreville, Virginia, placed sixth in her Mountaineer debut with a 582 smallbore mark (190 kneeling, 199 prone, 193 standing).

Smoyer finished eighth (581), and senior Sarah Osborn finished tenth with a mark of 577 to round out the Mountaineers in the top 10.

Additional Mountaineer smallbore marks included a 576 for sophomore Malori Brown and a 569 for Sanchez, placing 11th and 18th, respectively.

Eddy finished seventh on the team with a 594 air rifle mark, and Zaisberger finished in eighth with a 591 total to round out the top 10.

Additional Mountaineer air rifle marks included a 582 for Brown and 581 for Engler, finishing in 13th and 16th place, respectively.

With the win, WVU improves to 19-0 all-time against the Zips.

“It’s going to be a busy next few weeks with four more matches in a short amount of time,” Hammond said.  “We’ll get back to practice Monday, but overall we are happy to get back to competition.”

The Mountaineers open their home season with a match against No. 13 Ohio State, on Saturday, Jan. 23, at the WVU Rifle Range, in Morgantown. 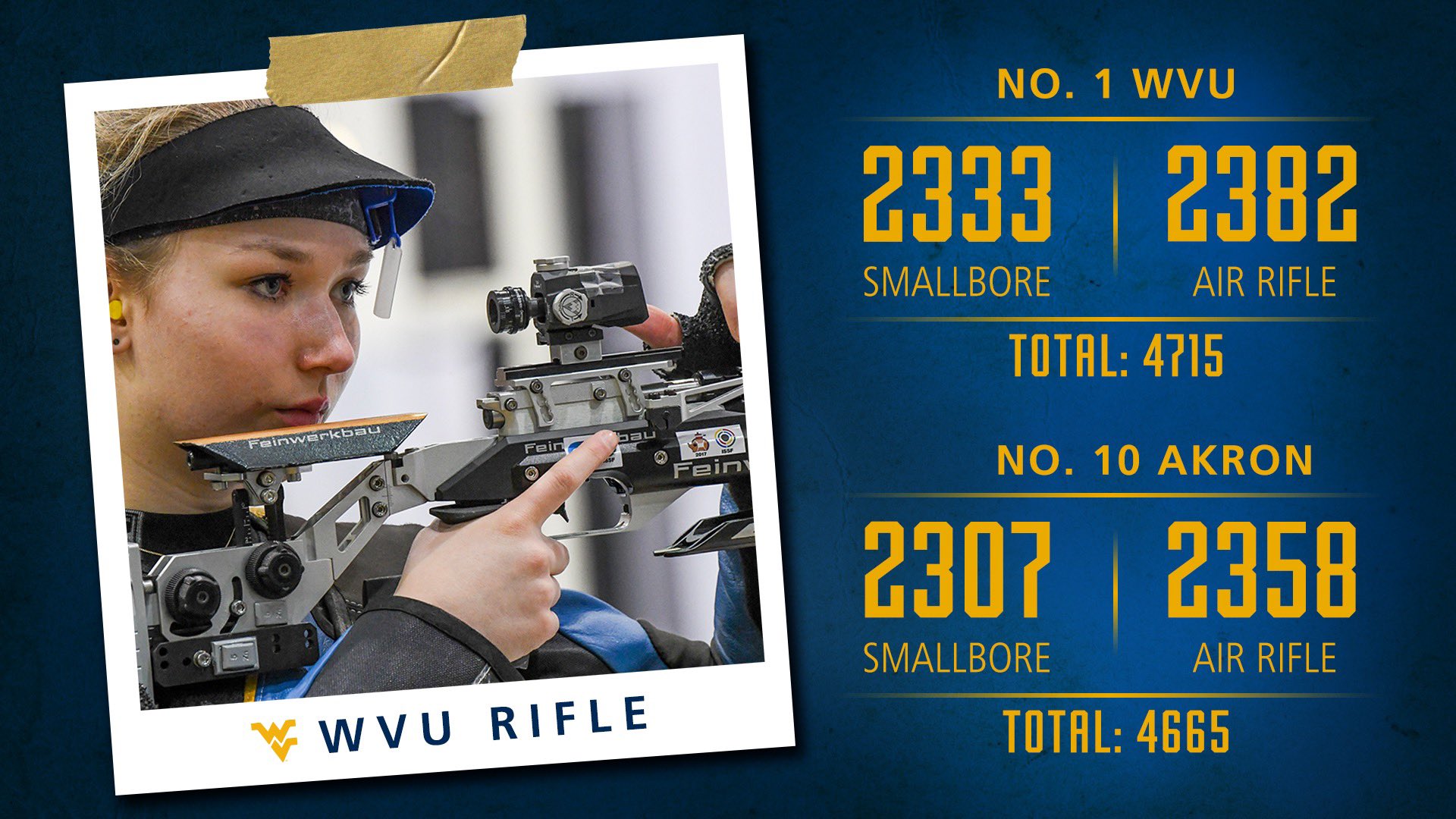