West Virginia heads for the Big Apple for Saturday’s contest with St. John’s, and while Madison Square Garden might not have quite the same reputation as it did in the past as the center of the college basketball universe, there’s still plenty of anticipation on the Mountaineer basketball team for the trip.

“I think they are excited about it,” WVU head coach Bob Huggins said. “I don’t know if it is what it once was, but that’s the place. It’s like the song, ‘If you can make it there, you can make it anywhere.'”

For Huggins, and fans who were around when the Mountaineers were members of the Big East, memories of trips to the arena to play St. John’s in some league games, as well as the featured week of the Big East tournament, still resonate. There’s a Broadway-like setting inside, with the seating areas darkened and the court brightly lit like a theater stage, that brings a spotlight feel to the proceedings. Add in the history of all the great games there, and it’s an experience.

“I remember going to Madison Square Garden as a sophomore  and I was giddy,” said Huggins, who actually made that trip as a junior in 1976. “We got there early and the Knicks are out there. Willis Reed is out there shooting, and Walt Frazier, and Dave DeBusschere and Walt Frazier and Bill Bradley and Dick Barnett. I had to pinch myself.”

Huggins scored eight points and had four rebounds and three assists in an 86-76 loss to Rutgers in that game. Similarly, he hopes this year’s team doesn’t remember the details of its last visit, a 66-56 loss to Florida last year.

“I hope they are like me and they don’t even remember it,” Huggins said. “Let’s just go play St. John’s.”

WVU is 36-52 all-time in the Garden. As a neutral site venue, playing mostly in league or NCAA Tournaments, West Virginia is 25-35. It has won just one of its last six games there after sweeping three wins and the Big East title in 2010.

Saturday’s opponent, St. John’s is 7-2 with losses to Vermont and Arizona State. The Red Storm is playing at an uptempo pace, and is 20th nationally in scoring at 81.1 points per game.

“They are shooting the ball inside of 13 seconds on every possession, and they lead the country in possessions,” Huggins noted. I think with the guys they have, they think they can get extra possessions and outscore you.”

The Red Storm have seven players averaging between seven and 15 points per game, led by Mustapha Herron, who is hitting 50% of his 3-pointers. The Jonnies have taken 52 more shots than their opponents, and are fifth nationally in field goals attempted, getting up alomst 68 per outing.  WVU, even with its offensive rebounding leading to more shots, is tallying just 59 (140th).

St. John’s also fuels the pace with lots of pressure.

“They play the way that Mike (Anderson) has always played,” Huggins said of the first-year Red Storm head coach.  “They are going to press and press multiple ways. Diamond, box press, man to man, run and jump. Those are things he has done for a long time.”

Anderson was fired at Arkansas at the conclusion of last year after an eight-year run in which he never had a losing season, and guided the Razorbacks to NCAA appearances in three of the last four years. He took over for Chris Mullin at St. John’s, who resigned at the end of last season.

While Huggins is looking forward to the Garden party, he remained in the now in terms of what a win in the World’s Most Famous Arena might mean in the big picture.

“It means we are 8-0 and come home for two games before we go to Youngstown,” he deadpanned . “The guys have been pretty good at taking them one at a time.”

The development of West Virginia’s inside game, and the nuances of playing two big men together, continues. Huggins has mentioned problematic spacing as one issue, as the techniques of playing high-low sets are still new to all involved. Derek Culver, with his greater experience, appears to be more comfortable playing in the high post than Oscar Tshiebwe, but Huggins notes that he isn’t afraid to put the freshman up in the key, as he has done in some instances this season. That would allow Culver to get touches in the paint, and also allow WVU to react to match-ups that are favorable for one big over the other.

On the defensive side, the more mobile Culver is also better at playing on the perimeter to disrupt ball screens, and he can switch assignments in many circumstances. Again, this is an area in which Tshiebwe is still learning, and Culver’s growing versatility can allow that to proceed without forcing it. 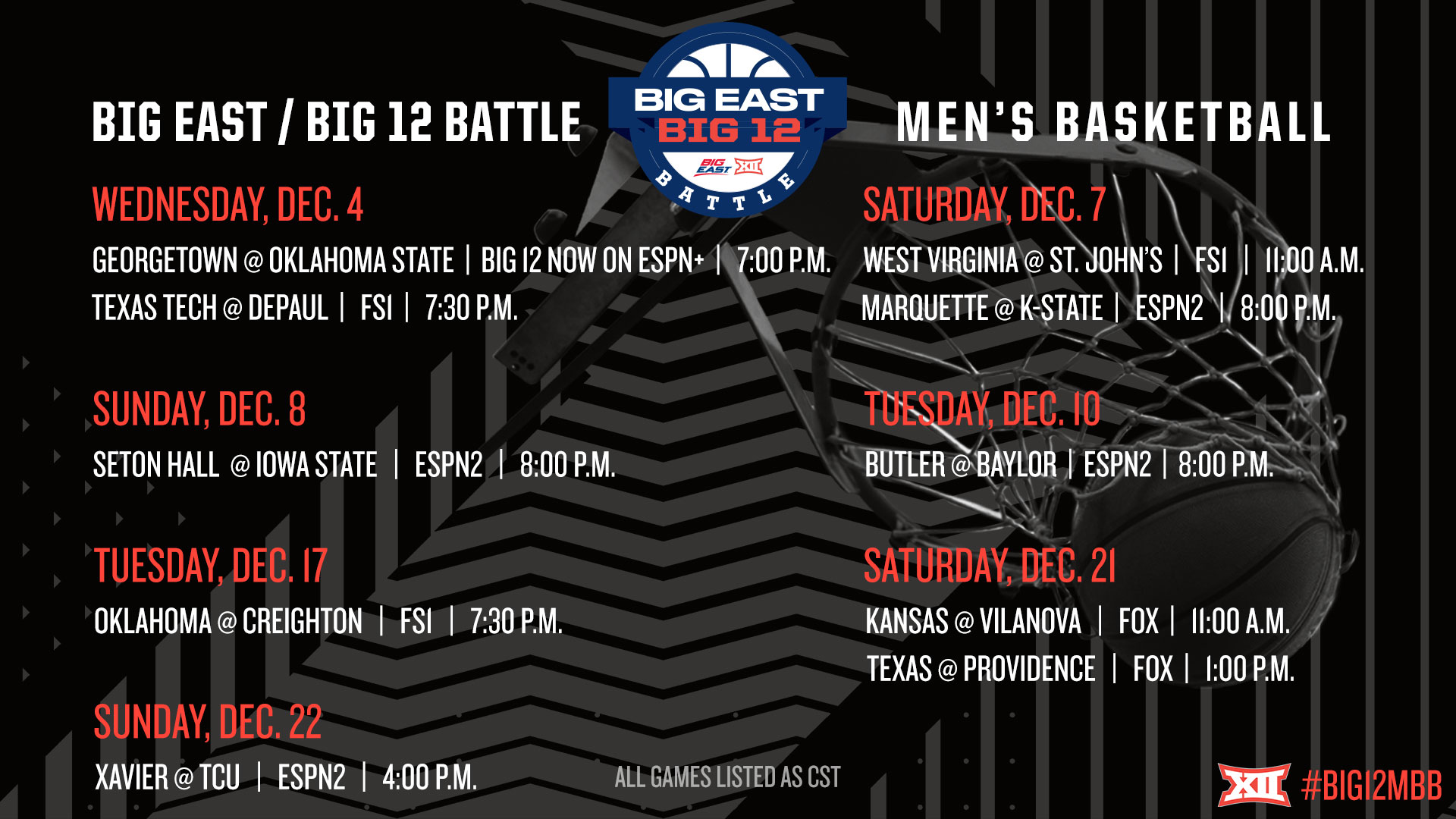 The game is part of the Big East – Big 12 Battle, featuring contests between all ten teams in both leagues. The Big 12 is not off to a good start, going 0-2 on Wednesday, with Texas Tech falling to DePaul and Oklahoma State dropping a home decision to embattled Georgetown. Along with WVU, Kansas State plays Marquette on Saturday. Six additional games in the series will be played over the next two weeks.

“The games are made for TV,” Huggins noted. “That’s a chip that the conference throws out there for television to enhance the package. I think it’s good. The thought behind it is we have 18 league games where most others have 20. So these two games (in league matchups against the Big East and SEC) against quality opponents gives us 20, so we aren’t shorted anywhere for so-called quality games.”

The tough opposition doesn’t have an influence on West Virginia’s non-conference scheduling practice.

“We had an opportunity to play Ohio State in northeastern Ohio, and because we recruit there that’s a good game for us,” Huggins observed. “And playing at Youngstown State, part of that is because of Jerrod (Calhoun), but also for the recruiting aspect. Any exposure there helps us.”

Calhoun, a former WVU assistant, is in his third year with the Penguins.