Derek Culver is the first Big 12 men’s basketball player of the week in the 2020-21 season. The award was Culver’s first.

A native of Youngstown, Ohio, Culver was named MVP of the Bad Boy Mowers Crossover Classic after leading West Virginia to a 3-0 start. He collected a double-double with 23 points and 15 rebounds against VCU and scored 15 points in the championship win over Western Kentucky. The junior forward registered 14 rebounds and four blocked shots in the Mountaineers opening game win against South Dakota State.

Culver averaged 15 points, 10 rebounds and two blocks for the week while shooting 52.9 percent from the field and 75.0 percent from the free throw line. He also had six assists against just three turnovers while averaging more than 29 minutes per game.

West Virginia travels to Indianaplis to face No. 1 Gonzaga on Wednesday, Dec. 2 at 7:30 PM ET. 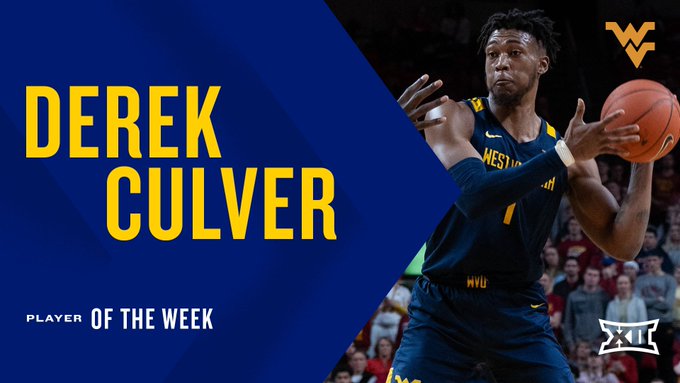